Telling the tooth about history

Aimed at a younger audience, we study some dental history in the style of 'Horrible Histories'

Q: What Do You Give a Caveman With Toothache??!

The funny thing is though, not all cavemen did suffer from tooth decay, unlike many of us today. Why not? Because they ate all natural foods. Fossil remains from the Stone Age have shown that teeth were generally well preserved as the result of a natural diet!

Q: Why did the Brontosaurus refuse to eat the caveman?
A: Because he didn’t want to get the club stuck between his teeth!! :)

The ancient Sumerians, were a civilisation who lived in an area known as Mespotamia (what a mouthful!) way back in 6000BC. They believed that tooth decay was caused by a toothworm! (Well that would explain all the holes!!) This belief extended into ancient India, China and was still widely used in France in 1390, by a French Surgeon, Guy de Chauliac.

The truth is though, tooth decay is caused by eating too much sugar! When Britain started sending ships all over the world, one thing they came back with in BARREL LOADS, was sugar. Refined sugar, like the kind you sprinkle on your cereal is very bad for your teeth. In Elizabethan times, people ate so much sugar that their teeth were terrible, they literally were rotting in their mouths! You can reduce the risk of tooth decay by putting less sugar on your cereal and avoiding sugary drinks.

It is not uncommon to see rappers on music videos showing off with their big cars, their amazing houses and their mouths full of gold teeth. It has even become fashionable for some celebrities to wear jewels on their teeth. Believe it or not this isn’t a new thing!

Hundreds of years ago, the Mayan civilisation, in Central and Southern America, used to carve grooves and notches into their teeth so that they could wear precious gems in them. Ornamental stones like jade were attached using glue made from the plant sap and crushed bones!

The oldest example of a tooth filling was found in Slovenia (Southern Europe) and dates back 6,500 years (approx. 4,500BC) where a jawbone with a cavity (hole) was found packed with beeswax! We’ve no idea if this would have cured it, but guess that this would have helped to ease the pain.

In ancient Egypt they were so good at fixing teeth they even managed to wire donor teeth into the gaps… just look!!! 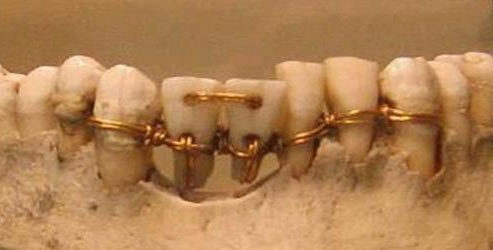 This is a photograph of a real-life mummy’s teeth from ancient Egypt and, incredibly they are 4,000 years old!!! The Egyptians, for all of their expertise and skill, had some pretty funny ideas about how to look after their teeth, too!

Phew! Here at Measham Dental, we’re pretty grateful we have access to much better materials and advanced technology! Just think yourself lucky you don’t live in ancient times! So remember, to avoid tooth decay, reduce the amount of sugar you eat and drink, and as well as brushing and flossing between your teeth or you may end up with a brontosaurus-sized problem!